During the early 90s, Ida Cooper had been working in UCT’s Department of Public Affairs and Communications. With the increasing international interest in South Africa and its move from apartheid to the democratic elections in 1994, UCT became a hub for visiting students and academics.

Ida Cooper’s knowledge of UCT and Cape Town, her experience of working closely with international visitors and her commitment to and engagement with the process of change in South Africa, led to a request for her to establish a support network for visiting students from the United States. Her earliest formal collaboration with a group of students from the U.S. was with Princeton.

By 1995, Ida had established her highly personalized and efficient IDACA student support service with close ties to UCT, her partners in the United States, UCT’s IAPO, established in 1995 and the Student Study Abroad programme formally launched in 1998.

In December 2015, twenty years after her study abroad semester at UCT, Nina Henning visited Cape Town and Ida Cooper, with her husband Lobsang and their baby daughter Tenzin. With her, as a gift for Ida, was a Yak Milk soap from Wild Earth Nepal, the small herbal cosmetics company in Kathmandu that Nina managed for five years after graduating from Princeton.

“Coming from Princeton in the 90s to UCT and Cape Town was a life-changing experience for me. It opened my eyes to the world beyond Princeton, New Jersey, gave me new perspectives and was a catalyst for future international travel and work opportunities.”

“Ida was like a surrogate mother to me as a twenty- year-old student in Cape Town. I stayed at her house for several weeks after my courses ended and my accommodation lease expired.” 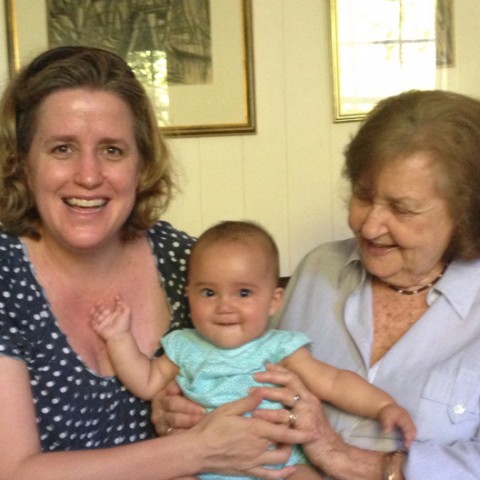 In 1995, Nina, a history major at Princeton, was one of the first students to participate in the newly formed exchange programme between UCT and Princeton. She cites Professor Robert Shell, professor of African History at Princeton and a South African, as one of the key influences in her decision to study at UCT. He encouraged her to apply for the new programme in post-apartheid South Africa, with its first democratic election in 1994 and momentous political change. She recalled a vibrant campus life with addresses by the likes of Archbishop Desmond Tutu and Winnie Mandela.

After her semester at UCT, she returned to the US, graduated from Princeton, backpacked through Asia (including Nepal) and began work in San Francisco for a consumer health internet company. After a few years in California, she applied to a post-graduate Princeton internship programme that sent her back to Nepal where she ended up managing Wild Earth, turning it into a successful business with which she still has ties. Later, she returned to the US to complete her MBA with a focus on environmental sustainability.

Nina currently works for an US multinational company and lives in Nairobi, Kenya with her family. She leads regional projects at the intersection of philanthropy and business, including an initiative in Rwanda that is focused on improving the livelihoods of smallholder farmers who grow pyrethrum, a flower that contains a natural insecticide.

Throughout this time, Nina has kept in contact with Ida Cooper who has provided student support services for visiting US students for more than twenty years.